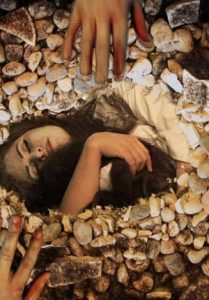 Poetic film combines: 1) A deep reflection of a French literary folktale, The Bluebeard, about a powerful man who kills the curious women who want to do the forbidden. I use its characters and events to reflect on the dictators behaviours towards the nation when they are rejected. 2) Poetic performance centered on a story of a mother and her child who were found alive under a destroyed building. The female in The Bluebeard story is a symbol for the nation. When the revolution took place, during the Arab uprising, it started with peaceful protesters; the respond was extremely violent from the regime part and people were killed on street, or after being arrested.

They belong to the armed wing of the PKK, the Kurdistan Workers' Party, which is also an active guerrilla movement. The mission of these female fighters? Defend Kurdish territory in Iraq and Syria, and defeat ISIS (the armed militants of the so-called Islamic State group), all while embodying a revolutionary ideal advocating female empowerment. As filmmaker Zaynê Akyol follows their highly regimented lives, seasoned fighters like Rojen and Sozdar openly share with us their most intimate thoughts and dreams. Even as fighting against ISIS intensifies in the Middle East, these women bravely continue their battle against barbarism. Offering a window into this largely unknown world, the film exposes the hidden face of this highly mediatized war: the female, feminist face of a revolutionary group united by a common vision of freedom.